Discontents of Simulation (or what you might call modelling) 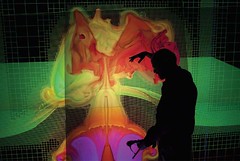 I’ve recently finished a book called “Simulation and it’s Discontents” by Sherry Turkle, which I bought while I was working on my presentation Big data at the intersection of people analytics and building analytics.  Part of my presentation was about creating simulations of human activity based upon big data, and I’d assumed the book would be about these kinds of simulations.  It wasn’t quite what I expected though – if I talk about architecture and a simulation – would you think of CAD? Nor did I!

In fact the term “simulation” is here applied to what we in architecture, interior design or engineering would use the term, models – specifically computer models. Part way through the book, our use of this term in architecture is actually discussed – that we use this term in resisting change, feeling a need to define the computer outputs in a language with which we are familiar.

It was interesting to see the understanding and language of computer simulations discussed across a variety of fields including architecture, engineering, life sciences, physics and even nuclear science (the image in this post is a nuclear simulation). The writers examine the attitudes of academics, students and professionals to the use of computer simulations in their fields – back in the 1980s (hence CAD) and again in the mid 2000’s. It was intriguing to see how much things have changed – and even just since 2005 – but at the same time how much things stay the same. The argument between hand drawing and Revit models continues  in many offices to this day. Personally I think it will keep on going for some time, because now even our clients have started contributing to it! One design gets up because of a sexy fly though and renderings, another client is only convinced of the quality of the design when they see some pretty hand drawn perspectives (which had in actual fact been traced over a Revit model!).

Do we think only by drawing as is so commonly stated by architects and designers?  I still keep a roll of trace at my desk and use it at some point in every project, I do think while I draw. But I think while I model too. Often the model makes me think harder. Things cannot be faked and fudged in the model as easily – to do so the person modelling almost always has to make a conscious decision to fudge it, to take a shortcut. At least anyone who actually understands the building does. There are certainly those who have been taught to fudge it, make today’s drawing or image pay off, get it out the door. There are certainly times when you need to. But that’s not BIM and it’s not thinking either. To me it’s the same by hand – you can draw or trace without thinking about how something really works, if it works in 3d or from the back, how it’s built, if it complies with code. You can do the same with a model. But if you model properly, with the intent of creating something that can be built then you have to think at the same time.

Interestingly one of the biggest concerns of the “discontents of simulation” was the same for all the disciplines discussed. It was a concern that practitioners became disconnected from the reality and the physicality of their discipline – unable to judge what is possible in the real world as opposed to a simulation. In architecture there is no doubt that this problem occurs, with the number of technical detailers and specification writers (often of the grey haired variety) dropping in many offices and there not being a younger generation to replace them.

Now in the architecture profession, we could blame BIM and computer software for this problem – but is it? Does anyone really think so? We can blame a lot of things on BIM, but is it BIM or is it something else?  When I read articles blaming poor design on BIM, it often seems to me it’s a different problem. The problem is about many things – most of which are outside of BIM. First and foremost it’s a lack of a transfer of knowledge.  Whether that is the immediate transfer of knowledge between designer and modeller, or the lack of BIM knowledge of the designer or the lack of technical knowledge by the detailer.  Why isn’t this knowledge being passed down? Is it a lack of interest in either teaching or learning – I don’t think so. I think it’s a lack of time. A lack of time (and fees) for graduates to go out on site and learn about construction.  A lack of time for more senior staff to learn about BIM. A lack of time because there are so many different things we expect an architect or interior designer or engineer to do and know. Not just one BIM software but many packages for modelling, presenting  and maybe even project managing and scheduling too.  Its not just the amount of knowledge required either.  Its the pace – every year projects seem to be delivered faster and faster – it’s not even about fees anymore – sometimes there really just isn’t any time for someone to explain what or why something is done that way – it just has to go out to the builder now.

Is this affecting the quality and cost of design? Of course it does. It’s not just the time for teaching, it’s also the time for thinking. It has been proven that as architectural fees go down, construction fees go up. While BIM can help rescue RFIs and variations – it still remains true garbage in, garbage out. This is the biggest concern of the discontents of simulation – sometimes at the end of the day the simulation is so beautiful, we could be blind to the garbage that went into creating it.

PS. For further inspiration Come Out to the (Midnight) Lunch – If you are in Sydney on Thursday 16 October, I am organising another opportunity for followers of this blog to meet and network.  If you are interested in having a drink, meeting new people and talking with fellow The Midnight Lunch followers about workplace, interior design, architecture, BIM or collaboration in our industry – come to Chicane Bar at 10-20 Bond St in the city from 5.30pm. Note the event is not sponsered, buy your own drinks and food. RSVP ceilidh@themidnightlunch.com or just turn up on the night.